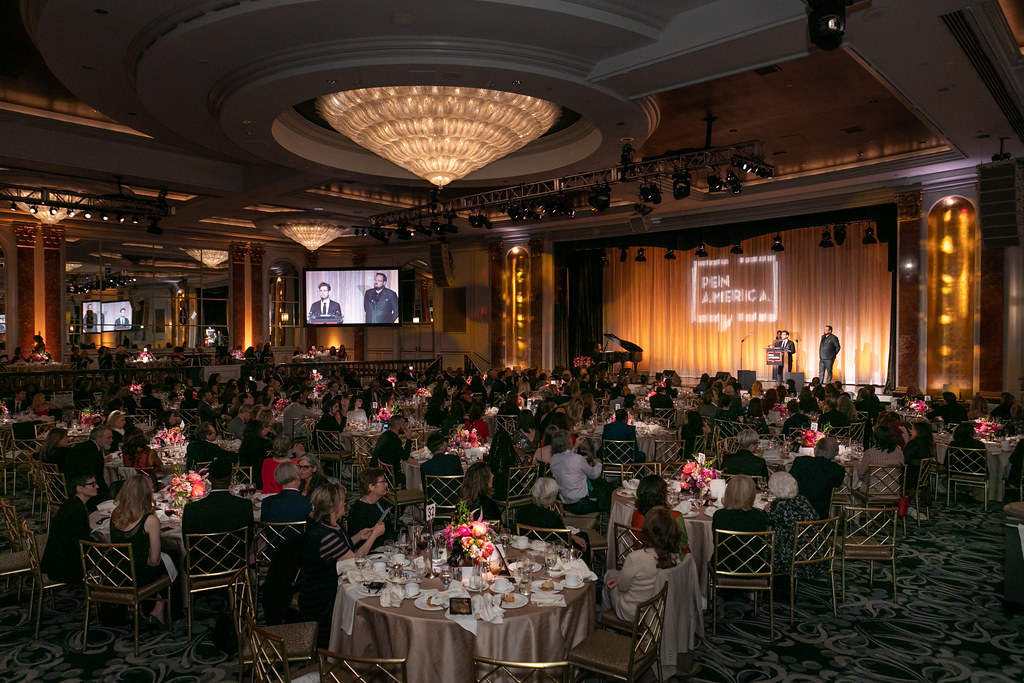 PEN America’s Los Angeles LitFest Gala on November 1 was a night to celebrate some of the biggest names in free expression and the arts. Honoring filmmaker Ava DuVernay, free speech lawyer Theodore Boutrous, Jr., songwriter Diane Warren, and investigative journalist Julie K. Brown, the gala highlighted the grave threats to free speech and artistic liberty, but also the courageous voices that have emerged despite those threats.

“I wish I could announce to you tonight that the state of our freedom of speech is strong,” said PEN America’s CEO Suzanne Nossel. “But it isn’t. Free speech is under attack by a poisonous political environment. Words are being drained of their meaning. People talk about truth and fiction as opposites, but they’re not. Fiction, including the extraordinary stories we celebrate tonight, is a path to the truth.”

”People talk about truth and fiction as opposites, but they’re not. Fiction, including the extraordinary stories we celebrate tonight, is a path to the truth.”

“More than ever, PEN America is committed to appreciating the written word, the power of the individual voice, and the courage of those who resist silence even under threat,” said PEN America Los Angeles Executive Director Michelle Franke.

Comedian Kathy Griffin presented this year’s PEN America Distinguished Leadership Award to attorney Theodore Boutrous, Jr. He represented Griffin in her own First Amendment battles, and he has since represented journalists who’ve been targeted by President Trump, including PEN America Members Jim Acosta and Brian Karem.

“It really is up to us, up to all of us, to uphold the rule of law and the First Amendment,” Boutrous told the crowd at the Beverly Wilshire Hotel. “The whole point of the freedom of the press is to ensure that the American people get information they need to govern themselves and make decisions about who their leader should be and what our policies should be.”

Now in its 29th year, LitFest honors those who stand up for free expression but also creative professionals in the entertainment industry who tell vital stories. This year, actor Blair Underwood presented the Voice of Influence Award to acclaimed filmmaker Ava DuVernay.

“A lot of people ask me, how does it feel to be an artist and activist? How do you reconcile those two things?” DuVernay said. “They ask the question so often, and I love that because I have a great answer for it. I say: to me, they are one in the same. To be an artist, you must imagine and create and world-build. To be an activist you must be the same, because an activist has to imagine the world that isn’t there, and make it so. Activism is art, and art is activism.”

“To be an artist, you must imagine and create and world-build. To be an activist you must be the same, because an activist has to imagine the world that isn’t there, and make it so. Activism is art, and art is activism.”

Honored with the Dan Eldon Courage Award in Journalism and a standing ovation for her work exposing Jeffrey Epstein, Julie K. Brown of the Miami Herald commemorated the award’s namesake, British-Kenyan photojournalist Dan Eldon who was killed in Somalia working as a photojournalist in 1993.

“I’m honored to receive this award named for a passionate journalist, who risked his life to expose the human costs of war,” said Brown, “and was a courageous crusader for vulnerable people that the world often ignores. Journalists like Dan Eldon can only expose our world’s failures. It takes activists, lawyers, thinkers, leaders, and courageous individuals to bring social and political change. Now is the time for all of us in the media to stand up and call the sexual predators and their enablers into account.”

The evening was also a moment to reflect on giants of literature lost in the past year, including longtime PEN America supporter and Nobel Prize winner Toni Morrison. Actor LeVar Burton offered a moving tribute to the late writer.

“My ultimate takeaway from the celestial gift that Madame Morrison was is this,” said Burton. ”That if we can sit long enough in the presence of one another, and be open to the experience of hearing one another’s story, we can discover the things that we share in common with those who only moments ago we had considered the other, somehow unworthy of our time. We have all, I believe, been made better by her presence among us, by her wisdom, her guidance, and her incredible stories.”

The PEN America LitFest Gala is a highlight of the Los Angeles literary and social calendars, with over 500 guests and an impressive group of leading writers and creatives who sit among them as Literary Hosts.

Each year, the event brings together impassioned tributes, conversation, and levity before an esteemed audience of authors, screenwriters, producers, showrunners, executives, philanthropists, actors, and devotees of the written word who share a commitment to the robust defense of creative freedom in Los Angeles and around the world.