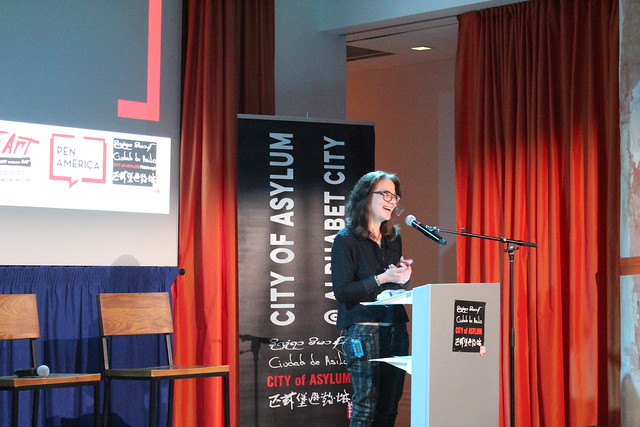 Moderator Kyle Dacuyan is the senior manager of literary outreach & activism at PEN America, where he facilitates partnerships with other cultural and advocacy organizations and leads PEN America’s community engagement funding for members, writers, and other allies. He currently manages PEN America’s Press Freedom Incentive Fund, a resource for locally led projects on issues around media truth, representation, and information access. He has been an organizer for LGBTQ+ rights and immigrant justice, and has published poetry in Best New Poets, Lambda Literary, and DIAGRAM, among other places.

Poet Marlin M. Jenkins was born and raised in Detroit. A graduate of University of Michigan’s MFA program, his work has been given homes by The Collagist, The Offing, The Journal, Bennington Review, and more. He has worked with students in Detroit Public Schools through the Inside Out Literary Arts program and received a fellowship from the Vermont Studio Center. He is also a runner and a dancer.

Poet Casey Rocheteau is the recipient of the inaugural Write A House permanent residency in Detroit in September, 2014. Casey attended Callaloo Writer’s Workshop, Cave Canem, and Bread Loaf Writers’ Conference in Sicily. Their first collection of poetry, Knocked Up On Yes, was released on Sargent Press in 2012. Their second collection of poetry, The Dozen, was published on Sibling Rivalry Press in 2016.

Come work with us! Our development department is looking for a development and events coordinator. The role straddles database and donor management, and also assists with events and other key responsibilities. https://bit.ly/2ZqOvX8

Republicans and Democrats are both gunning for #Section230, the law that created the Internet. Read up on last week's (mostly bad) proposals and what they could mean for free expression online: https://bit.ly/3dUCiz4.